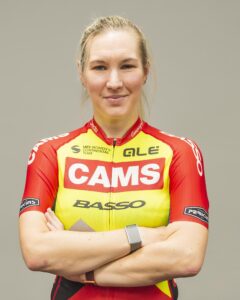 I have been a full-time, professional cyclist since completing my PhD in Inorganic Chemistry at The University of Cambridge in 2016.  To date I have won two Elite British TT titles (2015 & 2016) and 17 CTT National titles.  I am the holder of 3 British TT records (at 10, 25 and 50 miles) and was the first woman to break the 50 minute barrier for a 25 mile time trial.  I have represented Great Britain at international level at 5 World Championships and 3 European Championships since 2015, and won a bronze medal for Team England in the time trial at the 2018 Commonwealth Games on the Gold Coast and another for Team GB in the time trial at the 2019 European Games in Minsk.

In 2017 I achieved 8 top 10s in UCI ranked events, including a win on Stage 3 of Lotto ThuringenLadies Tour in Germany which ultimately resulted in a 3rd place in the GC.  That year I also finished 9th overall in Emakumeen Bira in the Basque Country, having finished 6th on the queen stage which ended at the summit of a 13km climb.  I consider myself a GC rider who specialises in time trials and long climbs.

In 2021 during my first year representing CAMS-Basso I was awarded the prize for Most Combatitive Rider at The Women’s Tour following a solo break on Stage 5 of the race.

Outside of cycling I love to cook and bake and actually made my brother’s wedding cake.  I am a big cat lover and am mother to a black cat called Liquorice.

Favourite race: I love racing in Spain and have historically done well in the UCI races there. In the UK my favourite race is Tour of the Reservoir so I’m definitely looking forward to returning to Edmunbyers.

Favourite food: Mango. I am slightly mango obsessed and would happily eat one for breakfast every day. My pre-race meal is Alan Murchison’s tropical bircher muesli topped with a whole mango.

Favourite warm up tunes: I have a very eclectic taste in music! My favourite song to listen to pre-race is “Sometimes” by Sound of Guns but my warm-up playlist also includes “Go” by Livingston, “Mr Brightside” by The Killers, “Numb/Encore” by Linkin Park/Jay-Z and “Where We Belong” by Lostprophets.

What are you looking forward to most in 2022: I really want to build on my success of 2021 with CAMS-Basso, particularly a great performance (both individually and as a team) at The Women’s Tour last October. I’m incredibly excited to have some Spanish stage races on the calendar this year and hope for some good results in these, and I’ll also be representing GBCT at the UCI Esports World Championships at the end of February. I’m keeping one eye on the Birmingham Commonwealth Games and will be hoping to earn selection for Team England.