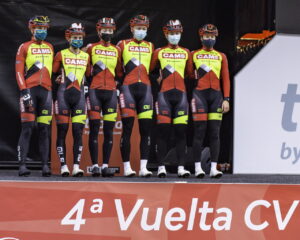 The 2022 season kicked off yesterday with a top 20 for Maddie Leech amidst a hectic finale. True to previous editions, the Vuelta CV Féminas came down to a sprint finish, with CAMS-Basso adding a bit of spice on the hills above Valencia.

Now in its fourth edition, this relatively young race takes place on the same undulating route from Paterna to Valencia each year. It was our first time at the race so a partial route recon the day before helped the riders prepare for the final kilometres of the course.

Andrew Paine, Director Sportive explained the plan for the team, “We knew the race would likely come down to a sprint finish but we wanted to make it lively, so the brief was for Becky Storrie to attack after the feed zone on the second climb. She executed it perfectly and got away for almost 10 minutes. She even had a 19 second gap at one point before it all came back together.” 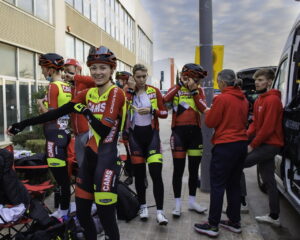 “Having looked at the course profile I knew that was going to be the best time to do it,” explained Storrie, “but I didn’t know exactly what the climb was going to be like until I was on it. I knew I needed to get myself to the front early so I was prepared for any opportunities I might see. When the road kicked up I went all in. I eventually looked back and saw I had a gap, which I thought was great, but I also kind of wished somebody had come with me! Then I just got my head down and kept going.”

Two riders, one from UAE Team ADQ and one from Valcar – Travel and Service eventually bridged across to Storrie as the climb kicked up again, and eventually they were joined by a further five riders. With all the major teams in the race represented in the break, for a moment, Storrie wondered if they may be able to work together to stay away.

“I think the big teams wanted the race to come down to a sprint as they would have a better chance of winning,” said Storrie, “so the other riders expected me to sit on the front the whole time. I wasn’t prepared to do that, so we got swallowed up pretty quickly.” 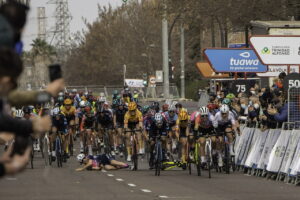 So the inevitable sprint finish was on. In the final kilometres the big teams began gathering their lead out trains and Sophie Lewis was well positioned at the front of the peloton. Unfortunately she got held up behind a crash in the final straight so it was down to Leech to see what she could do. In her first senior UCI race, Leech delivered, coming home in 17th position.

“My legs felt good,” said Leech, “it was just scary. The big teams have so many riders at the front peeling off and everyone else is dive bombing around them, it’s like Mario Cart! I’m really pleased with the result, all things considered. After we practice our lead outs at the training camp next week, it will be good to see what we can do next time. I’m excited for future races.”

The sprint was won by 2020 race winner Marta Bastionelli of UAE Team ADQ with Barbara Guarischi from Movistar Team being relegated for causing the crash that held Lewis and many other riders up. 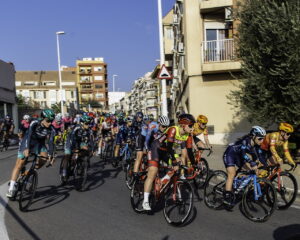 Paine summed up the team’s performance, “We’re really happy to get our first UCI points of the season in our first race. The race went to plan, as much as these things can, and I’m over the moon with how the whole team performed and how they gelled in their first race together. We were up there shoulder to shoulder with UCI Women’s WorldTeams and I feel the girls gained great respect from their colleagues in the World Tour peloton.”

The team is staying in Spain for a training camp before racing Setmana Ciclista Valenciana later this month.