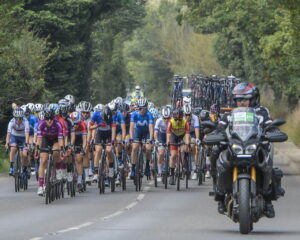 What an amazing six days for CAMS-Basso at the 2021 AJ Bell Women’s Tour. A first Women’s WorldTour stage race for the team and it did not disappoint. From Banbury to Felixstowe the team gave it their all, racing amongst some of the top riders in the female pro peloton and they did themselves, the whole team and sponsors proud.

The rider roster included a mixture of experience and youth, with many riders racing at this level for the first time. All six riders finished the Tour, which in itself is an impressive feat.

Team Manager, Simon Howes was pleased with the team’s performance and commented, “For the younger riders it was a massive learning curve and they stepped up. It was great to see them grow in confidence as the race progressed. They and the whole team take a lot away from this experience and we are grateful to the Women’s Tour organisers for giving us the opportunity to race on home roads.” 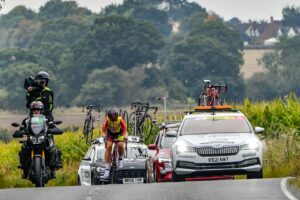 One of the standout performances for the team came from Hayley Simmonds during Stage 5. She saw her opportunity to break free of the peloton early in the stage and built up her lead to over 4:30 minutes at one point. Claiming bonus seconds from the Sprint competition, Hayley stayed away for over 60km solo. When she was eventually caught, with 16km to go, the team helped her finish with the leading group, which catapulted Hayley into 19th on GC. For this performance Hayley won the combativity award for the race.

Reflecting on that day, Simmonds said, “There’s nothing quite like a home crowd and the atmosphere at this British race is one of the best there is. I heard people cheering my name and I was getting a lot of support outside the schools. It wasn’t exactly the plan. When I went and no one came with me I just got into my rhythm. It was a hard day out but it was really nice to be away on home roads.”

There was elation from all the riders as they raced along the sunny seafront in front of massive crowds in Felixstowe on the final day. It was a fitting end to a fantastic race.

Check out our IG account for pictures and videos from the race.