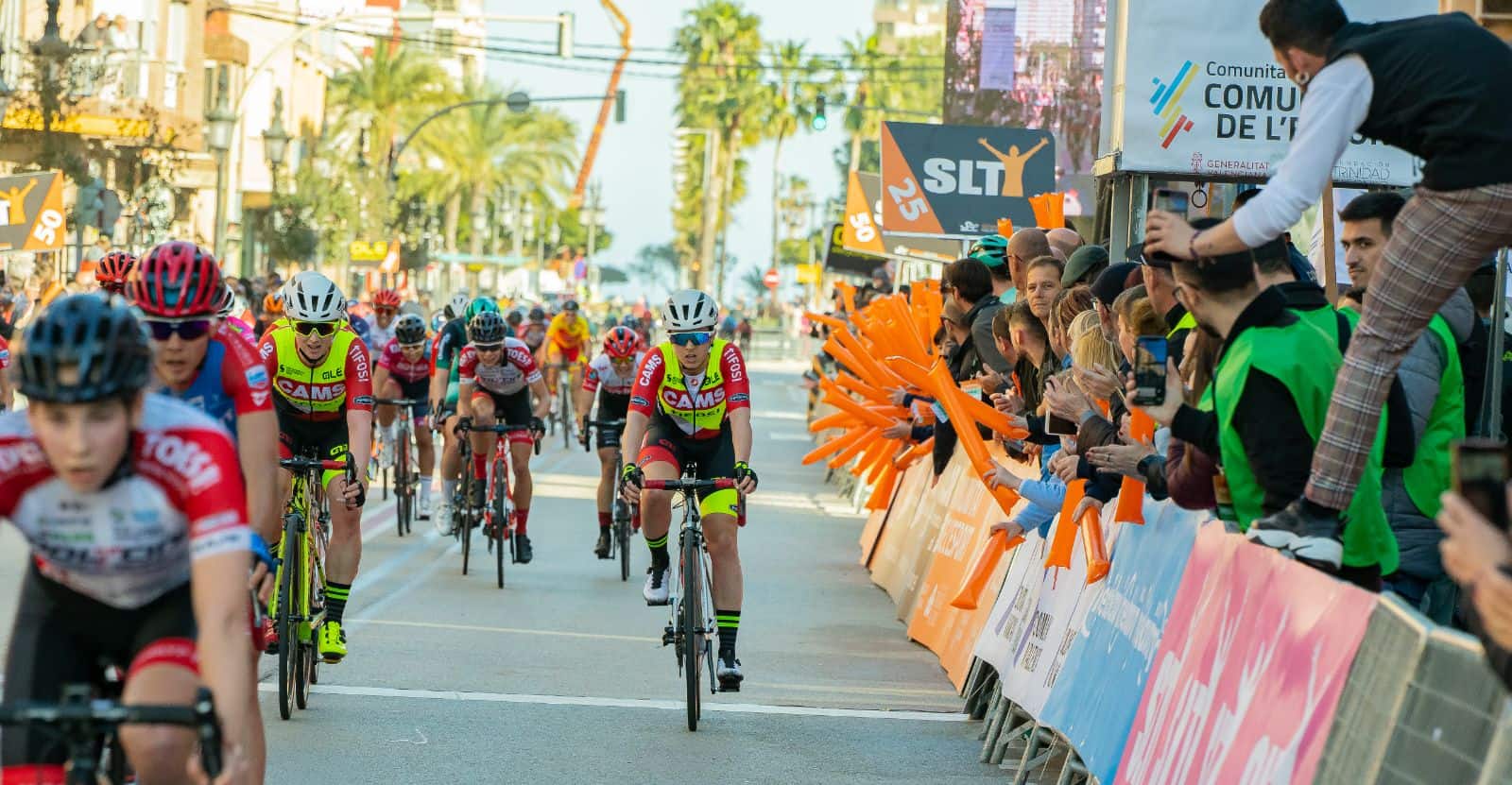 CAMS-Tifosi’s opening race was a huge success, despite being unable to contest the win after being caught behind a late crash in the first of four stages of Setmana Ciclista Valenciana – Vuelta Comunidad Valenciana Feminas.

The team had spent the entire 104km stage at or near the front of a star studded peloton, and were hoping to be involved in a bunch sprint. However, the crash, on a short but steep descent, just four kilometres from the finish, split the bunch, with all our riders caught behind.

None of the CAMS-Tifosi team were involved in the incident, and most finished together, well within the top 50, around half way down the chasing bunch, which crossed the line around one minute behind the winner.

“We’re really pleased, because it was the first one and we’re getting into the groove again,” said Jenny Powell after the race.

“It was quite a short stage and it was quite simple. There was a Queen of the Mountain quite early on, but it wasn’t anything too aggressive, and then it was flat all the way back to the finish.

“We had a lot of presence at the front especially from some of the other girls who have done a few more of these higher level UCI races. They were really good because they were always in such good position, so someone like me could try and follow them, and we have such a great kit that it was really easy to pick them out!

“I was upset we didn’t get to sprint, because my confidence grew as the race went on, and then to be stuck behind a crash is always annoying because it’s out of your control.”

The first of the four days kicked off with a 104km stage between Gandia and Cullera, on the Mediterranean coast, around 40km south of Valencia.

The opening 30km were mostly uphill, and with much of the peloton feeling their way into the first race of the new season, the 25 teams and 166 riders remained all together.

CAMS-Tifosi were well represented as the race reached the classified climb of the Puerto de Beniganim climb, where the pace lifted as the fight for mountains points began.

Katia Ragusa (Astana) was first over the top, and it was only after the climb, with more than 40km ridden, that the attacks began, though nothing was able to stick and the bunch re-formed on the flat roads afterwards.

Here, on the run into the day’s only intermediate sprint, the pace lifted, though our distinctive CAMS-Tifosi jerseys remained easy to see near the front of the peloton, inside the closing 50km.

Shortly after Maria Giulia Confalonieri (Ceratizit-WNT) took five points towards the intermediate sprints competition, Illi Gardner was caught up in a crash, caused by a touch of wheels. Though she was soon back up and racing she will be checked out this evening.

With the peloton apparently happy to allow the day to end in a bunch sprint, we remained near the front, monitoring any increases in pace as the race approached the coast, and headed south towards the finish, where the crash happened.

“We thought it would be a sprinters’ finish and the idea was to place a rider, whoever was feeling the strongest, for a bunch sprint. Your expectations have to be set correctly at this level, and to get all the riders through safely I’m happy with that,” said sports director, Simon Howes

Tomorrow’s 126km second stage between Agost and Finestrat is the second longest of the week, and its four classified climbs will make a challenging day for the entire peloton, especially with an uphill finish.