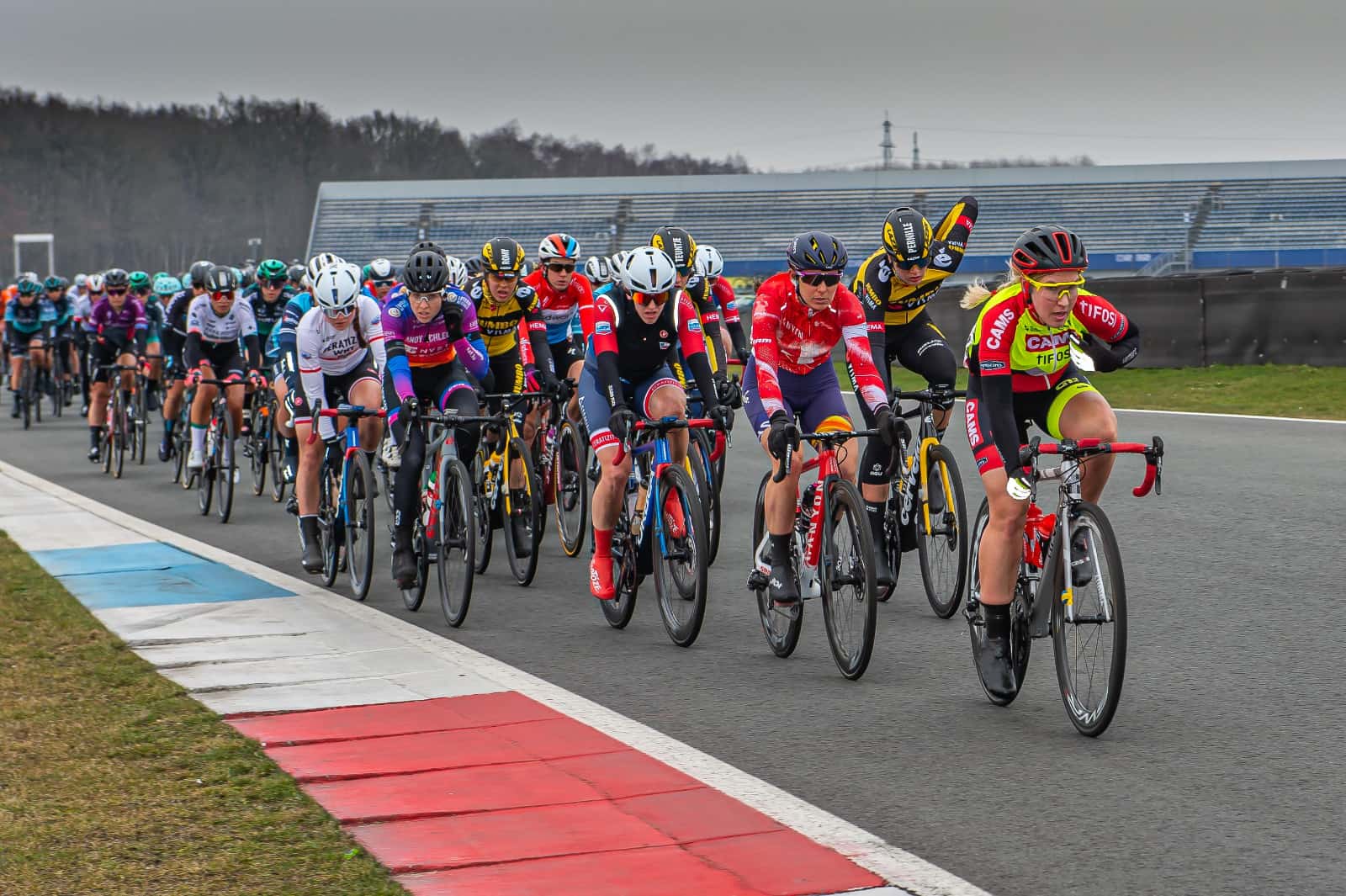 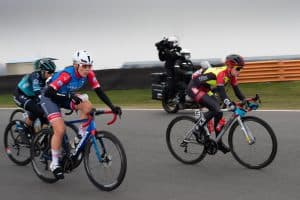 Jess Finney was CAMS-Tifosi’s top finisher in a tough opening stage of the Healthy Ageing Tour on Wednesday. Despite a crash for our sprinter Jo Tindley, all six of our women finished the 126km race in the north east of the Netherlands.

Jo Tindley was able to recover from a crash early in the race to still make it to the finish after quickly catching the main peloton again. 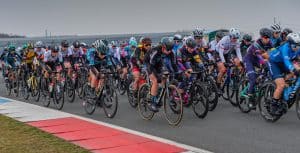 The stage finished with a chaotic sprint, with Belgian, Jolien D’hoore finishing first again proving the world domination of her SDWorx team. British champion Alice Barnes (Canyon-SRAM) finished second and had looked good for the win but was pipped on the line.

A crash just before the finish line meant the first group were all allocated the same finishing time as the race winner.

Eighteen year-old Dutch rider Daniek Hengeveld (GT Krush-Tunap) made it an exciting finish, taking a lead of 25 seconds into the final two kilometres. She was caught so late in the day she managed to finish inside the top 10.

Our yellow and red jerseys were visible in the bunch nearly all day, with an extended period on the front from new signing and former British time trial champion Hayley Simmonds.

“It was good, we knew it was going to be hard because we’ve not raced for so long, and riding in the bunch we’ve not done it for so long!” said team boss Simon Howes.

“Jo was our preferred sprinter, but you can’t just jump on a bike having not raced for a year and race against the best sprinters in the world.”

“We wanted coverage, we’ve been away for a year and our sponsors have stuck by us so we want to get our name mentioned on TV and we knew cameras were on us.”

The team’s first road race since February 2020 kicked off in the far north east of the Netherlands, where a strengthening southerly wind greeted our six riders for the 126km opening stage of the Healthy Ageing Tour.

Held on the Assen TT motorsport circuit the peloton took on 28 laps of the almost completely flat, 4.5km track. With bonus seconds available on three of those laps, and other sprints scoring towards the points classification the pace was high from the start, the bunch stretching for the first of the bonus sprints, won by Amy Pieters (SDWorx).

Former team member Anna Henderson, now riding for Jumbo-Visma bagged one bonus second at the next sprint, won by current German champion Lisa Brennauer Ceratizit-WNT). Then, as if accentuating the flatness of the Dutch route, it was Australian sprinter Chloe Hosking (Trek-Segafredo) who won the GPM and will wear the climber’s jersey for stage two.

There were repeated attacks and small breakaways throughout the closing 50km. Léna Mettraux (Andy Schleck-CP NVST-Immo Losch) was the most courageous, first getting away to win three seconds at the final bonus sprint, then going solo again in the final 20km.

But with most of the world’s best sprinters there it was always set to be a bunch kick.

CAMS-Tifosi have another chance to be seen tomorrow, when Hayley will be gunning for a result in the 14.4km time trial, held on the exposed North Sea coast. However, with rain and winds approaching 60kmh (37mph) forecast there is a chance it could be cancelled.

“It’s a flat out and back but the weather is supposed to be quite frightening,” said Simon. “But we hope it goes ahead just because of the challenges we’ve had to get here. That said we’ve had 75 miles in the legs today, so that in itself is 75 miles of racing that a lot of people haven’t be able to do.”

HOW THE REMAINING STAGES WILL HAPPEN:

This is an out and back time trial on a road next to the sea.

This circuit features the Col du Vam or VAMberg, which contains a short blast of 160 metres of 15-24% cobbles. Riders will ascend it a total of 17 times during the race.

All of these courses are closed to the public given the current Covid situation.

The Healthy Ageing Tour is broadcast live on TV and online – in the UK this will be on Eurosport and GCN.